I’ll post my #mapvember2017 maps here so they can be easily found in the future.  I hope you find use for these or at least get some ideas from them. The maps on this page are free to use according to CC-BY. Click the images to get the full sized versions.

All of these are hand drawn (and colored = grey spots). I do a little cleaning up with GIMP and on some maps I’ve added the grid digitally.

All done. I would have liked to have more time to spend on most of them, but that’s just how it is when doing these kind of ‘challenges’. There will be (hopefully) more polished maps in the future, but at a slower pace. I hope you’ll also check them out!

There can never be too many ambush maps. This is a simple map of a road by a lake or a river. The goblins (obviously) have blocked the road with a tree trunk and are ready to attack anyone who stops before the roadblock.

A group of bandits has made a base inside a hollow rock. Not much to report here. Could be situated in a desert or closer to a mountain range.

Cultists have taken over a particle accelerator and are using it in their rituals to pierce the walls between dimensions to summon unspeakable horrors from beyond!

A temple with surprisingly life-like statues.

The ghosts of long deceased prisoners are haunting this abandoned dungeon.

Unfortunately, I didn’t have much time to draw Monday’s map, so here’s a tiny gnoll camp with small cell for prisoners in the ruins of an ancient keep.

The atmosphere at a travelling fair turned sour when the main attraction escaped.

An uninspired – or perhaps classic – map of a hag’s hut deep in a watery swamp.

On the first view, this large room has only multiple pillars, but if players (or projectiles or spell effects, e.g. lightning bolt) crosses one of the dashed lines, an invisible portal teleports them to another part of the room

This is temple of Warcraft -style sea nags with underwater access and a couple of secret rooms.

Kobolds have taken over this small mine

A wizard died ages ago and compelled their minions to build a vault to protect their mummified body and stand guard until the wizard could be resurrected.

A lich has built a maximum security vault for their phylactery, but is it all just a hoax to lure adventurers to their demise?

The vault of the North Star bank was supposed to be impenetrable, but with the right ‘tools’, the door yielded quickly. Unfortunately, said ‘tools’ are still loose in the vault and hinder the investigation.

The federation has retrofitted one of their Spider-class recon ships with an experimental drive that transports the ship to hyperspace/warp for a short period.

A local trader found a trinket that opens a portal to plane of fire, but their plan to save on heating didn’t work out exactly as intended. To make matters worse, magmins have stolen part of the device necessary to close the gate. 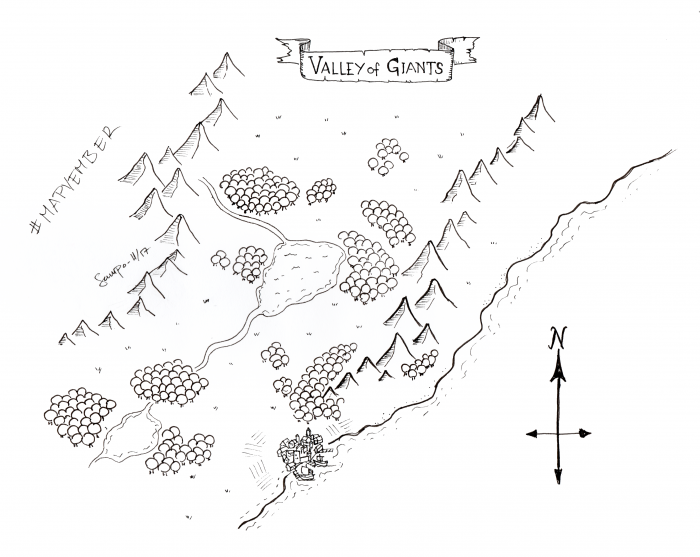 The shortest route from the coastal city of Iron port to the iron throne goes through the valley of giants. It is also the most dangerous route. You know… because of the giants…

A mage was unsatisfied with the slow pace of artisanal, hand-crafted golem production and decided to industrialize their operation.

A science team was sent to investigate a strange energy reading (originating from an ancient alien structure) on a cold planet, but shortly, all communications were lost. What could have happened to them?

Not much story this time. I decided to try drawing an isometric map (for the first time). Some parts turned out ok. This is a traditional troll’s bridge where the troll  might or might not collect a toll.

A stray bulette is terrorizing the basements of a small city.

I decided to draw another isometric map. I really have to think more carefully about the order of drawing things next time. Oh well, live and learn and perhaps the next one will be better. 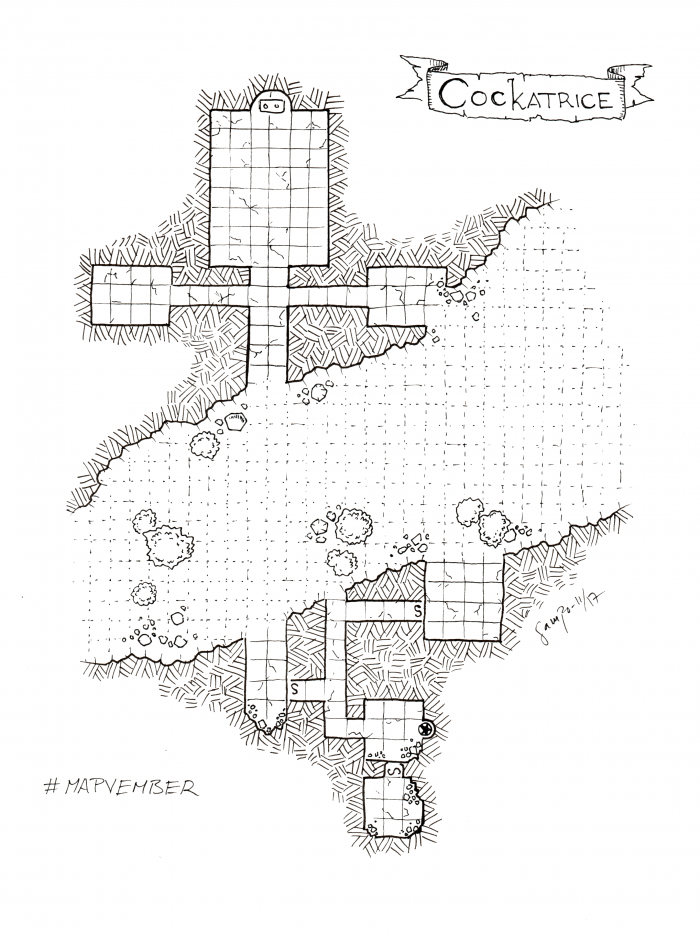 This was a quick and a bit uninspired map. The old temple ruins in the forest have been untouched for a long time as a roaming cockatrice has discouraged ‘amateur archaeologists’ from studying the area.

Repurposed heavy shuttle ‘Wyvern’ is one of the most successful ships in the rebel fleet at slipping past blockades and delivering cargo or personnel to operations on hostile worlds.

Maybe a bit uninspired map 25 of – An ancient fortress deep in a swamp where Will-o’-wisps lead unsuspecting victims.

Maintenance platforms above the sea have been taken over by swarms of blood sucking insects, but are they only the first wave of an invasion?

I also added a little color to this one, but my selection of markers is quite limited in that regard, but I think it looks sort of ok.

The house inside a stalactite might be small, but it boasts a powerful magical defense mechanism. Perhaps for a minor noble or a reclusive mage.

(Also had to check which one – stalagmite or stalactite – hangs from the ceiling.)

An idea blatantly stolen from WoW. A small dwarven brewery accidentally summoned an alemental that terrorizes the increasingly inebriated surrounding area. Maybe the herbs from the cursed forest were not the brightest of ideas…

A really quick and again not very inspired map. A harpy nest on the side of a mountain.

Final map of this mapvember! I felt a bit pressed for time with this map.

The skull of the great dragon Zalyx guards the gate to the citadel. The dragon was slain decades ago, but is a being of such power only slumbering and waiting for a chance to avenge?

So that’s it for this year. If you liked these, feel free to use them as you like. I will also draw maps in the future (although at a slower pace) and post them on this blog.

Thanks to all of you who took the time to check these out!

This work is licensed under a Creative Commons Attribution 4.0 International License.