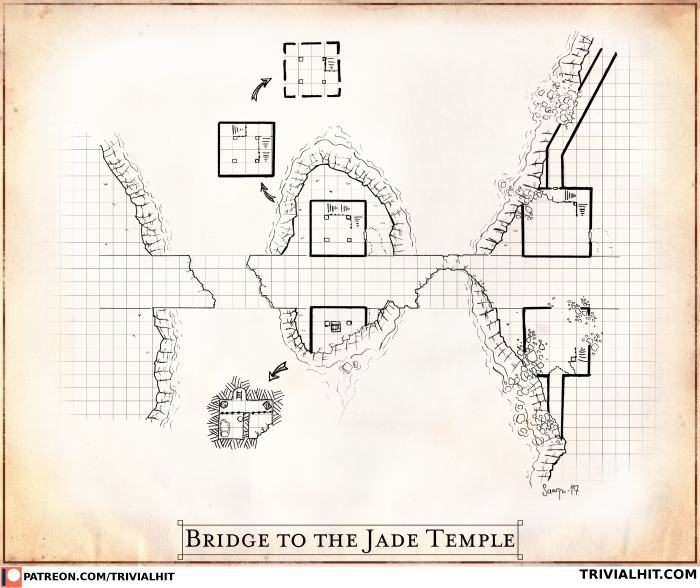 It’s been a while since I posted a map – I was really busy in the real world – but here’s finally a new one. If you feel like tipping me (or if you’re not content with these free versions), check the patreon. There is also an open thread for wishes and feedback so check that out, even if you don’t feel like becoming a patron right now.

This time I drew a broken bridge leading to a monastery. I put “Jade Temple” in the map implying a martial arts school or a place of worship, but as always, this is just a suggestion. You can also adjust the drop to the river to your liking, but I envisioned it to be considerable (>100ft or even higher). There is also a partially collapsed prison cell accessible from a trapdoor on the second tower on the island. The broken wall on the right side cell leads outside.

Encounterwise, the second tower on the ‘island’ still stands, so if there are enemies, they are likely camping there. So the party has two problems: First they need to cross the chasm / river. At the same time enemies assault them from the tower and perhaps even across the river. Obviously, this means that the encounter works best if most of the players do not yet possess the means to fly.

Here is a version without the grid. Each square is 5ft.

This work is licensed under a Creative Commons Attribution-NonCommercial-ShareAlike 4.0 International License.